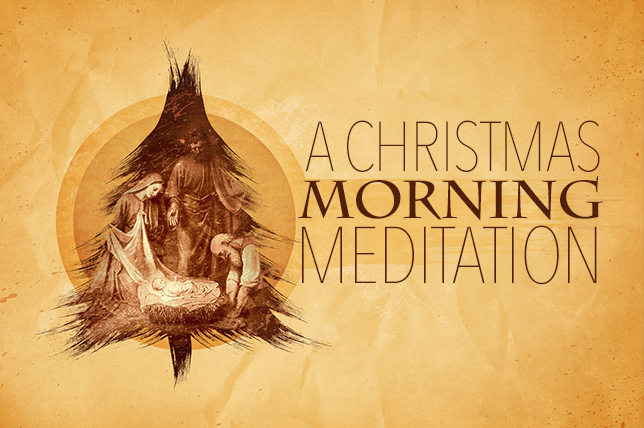 On this Christmas morning, let’s pause to ponder a single sentence from Scripture:

“She will bear a son, and you shall call his name Jesus,
for he will save his people from their sins.”
(Matthew 1:21, ESV)

It’s just twenty-one words; only twenty-three syllables in the English Standard Version.  It’s striking in its simplicity.  Yet it is breathtaking in what it affirms.

What do we learn?  The “she” in our verse is Mary, a virgin pledged to be married to Joseph.  Yet the focus is not really on Mary (or on Joseph), but on this son miraculously conceived “from the Holy Spirit” (Matthew 1:20) and whose name would be Jesus.

Scripture says that this son is “the only Son from the Father” (John 1:12).  It means that he is unique, one-of-a-kind, never-to-be-repeated, at once both fully man and fully God.  “For in him,” the Apostle Paul would write, “the whole fullness of deity dwells bodily” (Colossians 2:9).

So, rightly understood, Christmas is about Jesus, Son of Man and Son of God.  But why did he come?  Why would God send his only Son?

A look again at our verse gives us the answer:  “to save his people from their sins.”  At its core it was a rescue mission.

And how would he rescue us?  On our behalf, in his life he perfectly fulfilled the requirements of God’s law and in his death he paid in full the debt we had incurred through our sin.  As Scripture says, at the cross “God made him who had no sin to be sin for us, so that in him we might become the righteousness of God” (2 Corinthians 5:21, NIV).

And who did he come to save?  Another look at our verse tells us.  He came to save “his people.”  And who are “his people”?

And so, on Christmas Day we celebrate and honor the person and the work of Jesus Christ.  Trust him, follow him, obey him, and worship him.  He is God’s only Son who came “to save his people from their sins.”  To God be the glory!

Merry Christmas to you and yours!